We have a couple of main events which we organize on a yearly basis. 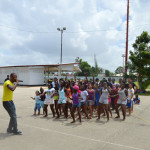 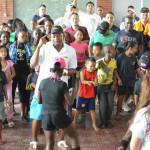 During this day the focus lies on giving the kids a pleasant, fun and unforgettable experience where they can enjoy the day to the maximum. On this day we provide an environment for the kids to play, have fun and express their talents. This event has been a typical Round Table Suriname event for over 20 years.

With the financial backing of sponsorships from local companies we are able to give these kids a day per year to never forget. Click here for more pictures

We have had the tradition of organizing a Round Table End of the Year Party in every last week of every December. This Party has a primary goal which is fundraising for charities. At these Round Table Parties we all participate in the organization of the Party and we make our own snacks and cocktails which we sell to the Partygoers. The revenues of these yearly parties are meant, as said before, for charities.

Since 2011, we decided to change the name to “Roundtable Bubu Party”. The concept stayed mainly the same, however since then we push and promote our Bubu cocktail as the main cocktail of the Party. We have seen that the party people have more fun at the party WITH Bubu. In addition, in stead of organizing only 1 party in every December, we decided to organize also one Bubu party in July/August every year, because of increasing demand.